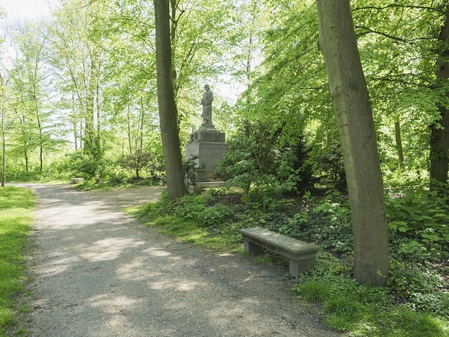 Lime tree avenue in the southern part of Schlossgarten, affiliated to the war memorial Denkmal für die im 1. Weltkrieg gefallenen Soldaten des 22. Artillerieregiments [Monument to the fallen Soldiers of the 22nd Artillery Regiment in the First World War] by Alexander Frerichmann (1923). Temporary installation for the duration of the Skulptur Projekte in Münster 1987, since 1988 permanent installation of two artificial stone casts of the original benches

Jenny Holzer’s contribution for the Skulptur Projekte in Münster 1987 comprised, in addition to the marquees in the Odeon discotheque, five sandstone benches from her series Under a Rock (1986). They were arranged symmetrically to the right and left of Alexander Frerichmann’s 1923 war memorial on the main avenue through Schlosspark. Two benches have been permanently installed since 1988. There are inscriptions reminiscent of memorial plaques on the seats, addressing the brutalities of warfare in such prosaic sentences as: “PEOPLE GO TO THE RIVER WHERE IT IS LUSH AND MUDDY TO SHOOT CAPTIVES, TO FLOAT OR SINK THEM”, for example.1

Holzer employs language as her primary artistic medium. For the benches, as for numerous other works, she made use of anonymous phrases that are easily understood and lead back to proverbs and sayings or clichés that are easy to commit to memory, as well as being generally comprehensible.
The benches make reference to war both formally and in their content; with no back or armrests they become reminiscent of sarcophaguses or tombs. The typeface that has been used is to be found on many gravestones in American cemeteries. Both through the alignment of the benches and the inscriptions the work, in its original as well as in its current reduced form, enters a critical dialogue with the existing monument, not only topographically, but also in terms of subject matter. The disparity between Holzer’s phrases and the tone of hero worship and the mourning of defeat in the First World War is made obvious on the monument itself, where it says: “Ob auch alles um uns sank, lasst uns nicht entarten! Haltet Schwert und Ehre blank! Unsere Toten – Warten!” [Even if everything around us has sunk, let us not ourselves degenerate! Maintain both sword and honour undefiled! Our dead ones – await!] 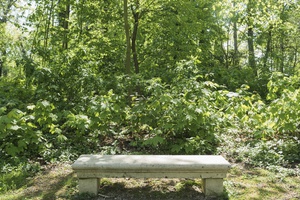 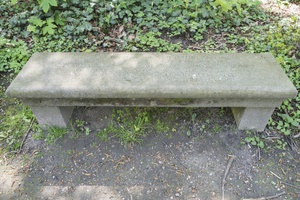 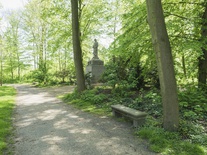