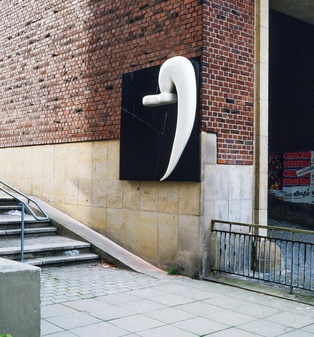 Vehicle entrance and steps between the building at Domplatz 23 and Fürstenberghaus at Domplatz 20–22, permanent installation (not on display in 2016 due to construction work)

As his contribution to Skulptur Projekte in Münster 1987 the US-American artist Richard Tuttle (born in 1941 in Rahway, New Jersey) mounted a two-part installation made of white-painted wooden objects on a house wall in the middle of the city centre. The shape of the two identical sculptures is reminiscent of an apostrophe or a bass clef. In spite of its central location, what is surprising about the work is its discreet, almost hidden presentation. Art and Music I is mounted into the corner of a narrow brick wall just inside a gateway — nowadays usually locked — whereas Art and Music II is placed at exactly the same height but several metres away on the outside of the same wall that flanks the descending level of a thoroughfare alongside the Fürstenberghaus which leads to (or away from) Domplatz, the main square in front of Münster cathedral. Both objects adhere to a common horizontal base line and appear to be spatially conjoined, as if part of an invisible notation system. Tuttle himself explains the interaction of the two forms thus: “The first object curls inwards (if viewed in terms of a spiral) and the second one outwards. Thus, taken together, they complete each other like a circle that first inhales, then exhales."1 The second sculpture in the thoroughfare is fixed to a square steel plate, whose rust red surface is marked with a geometric arrangement of weld seams. Passers-by are not able to see both objects at once. Yet if each object is contemplated in relation to its unusual surroundings one might, so Tuttle imagined, witness “the transfer of a kind of platonic mental image of balance. This equilibrium is the most important aspect”, as the artist explains in the guide to the 1987 exhibition: “the energy of the piece in the corner goes inward, the energy of the piece attached to the plate goes outward. This is a contribution to make the city become a sculpture itself, instead of asking the people to come to the park and view sculptures. The energy of the city may pass into these symbols.”2

Although Tuttle’s contribution to Skulptur Projekte in Münster 1987 is still located at the original site, architectural changes to the surroundings have radically altered the artwork’s impact. Initially, the sense of balance Tuttle described was based on the fact that both elements were mounted at the same height on either side of the brick wall, whereas the respective ground levels diverged due to the downhill incline on one side. However, this changed as a result of the conversion of the adjacent university institutes in 2016/17: the pedestrian steps of the thoroughfare running between Domplatz and the Siegelkammer were removed and the ground level was raised more than 50 cm. For this reason, Art and Music II is no longer at head height of passers-by but “hangs”, so it seems, considerably lower. In addition, these days the vehicle entrance is mostly closed by an iron gate and seldom used. As a result, only a small number of Münster residents are aware of Art and Music I. On the wall a few remaining scraps of posters from the 1980s are witness to the earlier foot traffic that passed through in this now disused passage.