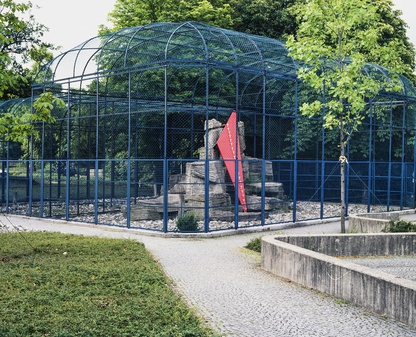 In the large aviary of the old zoo on the grounds of the former Westdeutsche Landesbank on Himmelreichallee.

Temporary installation for the duration of the exhibition; after August 1989 on permanent loan from the artist. The eagle aviary had to be demolished in 2002 due to disrepair, since when the work has been housed in the collection galleries of the Landesbausparkasse (LBS)

In the 1980s there were still several empty animal enclosures left standing in the grounds of the old zoo, among them the eagle aviary, where Mario Merz chose to locate his installation Optische Ebene. Behind the aviary’s bars he placed an irregular, red-varnished triangular steel form, whose upper edges were bent back and served as spacers to the artificial rock formation at the cage’s centre. Merz explained that he was trying “to make a table” that nestled against the rock “like a huge rose petal”.1 A number of glasses in an upright position completed the bizarre constellation of the already existing artificial rock, stone chippings and newly incorporated objects.

As one of the leading Italian proponents of arte povera Merz became known for his igloos built from natural and basic industrial materials slotted together within a metal frame. For Merz, these semi-circular edifices were symbolic prototypes of primordial life – a form of housing that manifested the contrast between natural and cultural development.

Merz’s work in Münster can in the broadest sense be ascribed to this conceptual context. While the artist generally constructed the igloo frames for his works himself, in Münster he chose an already existing frame in the form of the aviary. This structure formed the outer boundary for the sparse remains of an isolated environment that sought to appear natural but remained entirely artificial.

Likewise, in its modified form, the zoo cage echoed the sheltering function of the metaphoric igloo in the face of nature’s uncontrollable forces. It was once an artificial “habitation” for the creatures that were kept inside it, that had lived in a simulation of nature and were dependent on human care. Without the eagles the empty shell of a cage offered Merz a stage for his artistic commentary on things, nature and civilisation. 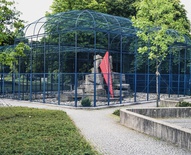