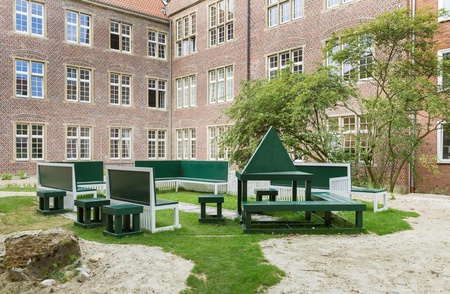 Location
Garden of the Geologisches Museum [geological museum] of Münster University, Pferdegasse 3, accessible by the steps to the so-called Jesuitengang [Jesuit path] or the steps from the Bibelmuseum [bible museum] courtyard

Siah Armajani conceives works for public spaces; often developed as a hybrid of art, design, and architecture, they are also inscribed with the idea of everyday utility, as is his contribution to Skulptur Projekte in Münster 1987. In the garden of the geological museum of Münster University, where rock formations have been located together with exotic trees, imported from America in the 18th century by an aristocratic family, he constructed a library environment in the open-air. The Study Garden consists of several groups of seating that are both open and closed.1 An axial stone footpath runs between two symmetrically arranged rows of benches, perpendicular to a triangular table, flanked by benches and stools. Originally further paths of terracotta paving with poetic brass inscriptions that led to the individual pieces of furniture were to be included, but these were not realized. The wooden pieces of furniture, painted green and white, are clearly distinguishable in their customised colours and spatial arrangement from other benches and seating in the city.

Armajani addresses the subject of study and research in his thoroughly poetic work, an idyllic environment situated within the university’s city centre campus, creating a space for seminars and an opportunity to do research in the open air. Students and faculty from the surrounding institutions enjoy using its afternoon shade on hot days. The artist’s work not only expanded the space available at the university: there is also an underground shelter below the grounds of the study garden that served for research purposes for the zoological institute in making vibration-free measurements during the 1980s. Although not visible at first glance, the concealed and open spaces provide two very different types of space in close proximity to each other. 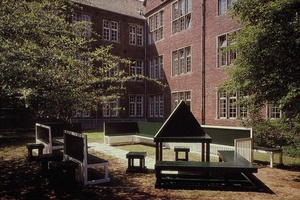 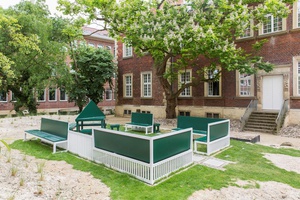