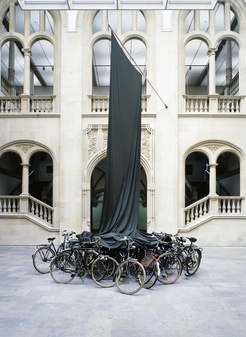 In 1987 Reiner Ruthenbeck used the atrium of the Westfälisches Landesmuseum für Kunst und Kulturgeschichte as the setting for a horizontal flagpole mounted some seven metres above the ground. Hanging from the pole was a flag cut from dark green loden fabric easily twice the length of the pole.1 The artist draped the excess length of the robust woollen material over fifteen bicycles standing in a circle below. The surface of the heavy fabric, initially smooth as it descended, threw rhythmic folds towards the bottom and partially covered the bicycles.

The appeal of the installation Lodenfahne lies in the opposites of gravity and buoyancy in the suspended length of cloth and in the contrast between the static museum interior and the means of transport “imported” from the outside world. Ruthenbeck was very familiar with Münster, especially since he taught there at the Academy of Fine Arts from 1980 to 2000. With this combination of flowing cloth and the bikes2 intended for mobility he created an ironic portrait of the city which – as a local saying goes – boasts of more bicycles than it has inhabitants.