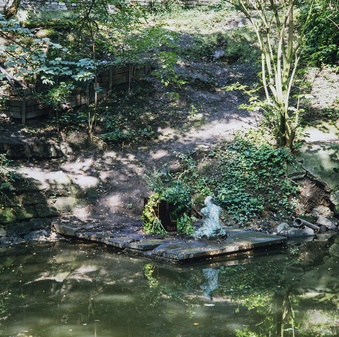 The Münstersche Aa river, between Promenade at Hallenbad Mitte, Badestrasse 8, and the head office of the former WestLB, today the Westdeutsche Landesbausparkasse, Himmelreichallee 40.

In 1987, Nam June Paik installed his project TV-Buddha für Enten (TV Buddha for Ducks) in the riverbed of the Münstersche Aa. To do so, he set a roughly modelled bronze Buddha on a flat wooded construction, raised enough so that it stood just above the stream’s water level. Without arms, with a pointed cap on its head and a cigarette between its lips, the figure was facing a ‘cannibalised’ TV set.

Developed spontaneously in 1974 as a stopgap solution for a gallery exhibition in New York, TV Buddha became an element Paik used on several occasions. Originally Paik placed an antique Buddha statue opposite its own video image as it was filmed in real time by a camera and shown on a television.1 Audience response to this work was enthusiastic and art critics interpreted it as a metaphor for the antagonistic relationship between Western technology and Far Eastern notions of transcendence.2

All later versions of TV Buddha continued the principle of improvisation in the work, yet Paik constantly revised this (self-)quotation in his work concept. For TV-Buddha für Enten in Münster the artist worked with a recast of a Buddha figure he had modelled a year earlier and had first exhibited along with six further statues in San Diego.3 In Münster the ducks created a poetic and humorous situation by paddling around the meditating Buddha and quacking.4 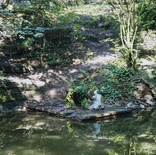