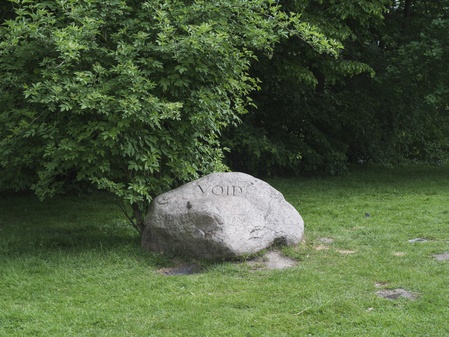 For many years a glacial erratic lay unnoticed on one of the lawns of the outer palace gardens. Prior to Skulptur Projekte in Münster 1987 George Brecht discovered the stone, and had the word “VOID“ engraved on it. Two further glacial erratics, likewise engraved, were then located on the university premises and at a busy city centre junction respectively, confronting the city’s residents with engraved stones formed by forces of nature, in urban spaces of very differing character. An encounter with the stones, then as now, became a fascinating interplay of seeing and reading, broaching the fundamental question of the character of the work as art.

In his proposal “Three Projects for Münster”, Brecht provided concise instructions for the selection and siting of the stones.1 In both of these phases, calculated chance played an important role, the actual work executed in 1987 being just one of many possibilities. This places the work closely to the “event scores” that Brecht, inspired by John Cage, had been developing from the late 1950s until his death. These scores were instructions for performances or for the treatment of objects that often sounded trite, but in being executed it was just this simplicity that allowed a special magic to unfold.

Brecht was deeply involved in Zen Buddhism, creating links to Hannya Shingyo, an important Zen text which contains the aphorism “Form is Void, Void is Form”, the one he probably had in mind when in 1986 he stated: “There is a certain way of experience where you can perceive that even a stone is empty.”2 The Three VOID-Stones are therefore more than readymades; using them Brecht is able to challenge the relationship between nature and culture as an issue of perception. “His goal was not to produce art but to generate an art-like attentiveness to the details of life.”3 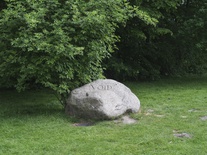