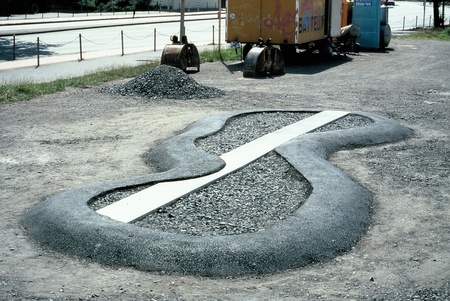 Schlossplatz (called Hindenburgplatz until 2012), on the southern half of the square between the entrances to the pedestrian underpass.

Temporary exhibition for the duration of Skulptur. Projekte in Münster 1997

Richard Deacon contributed two monumental undulating sculptures to the 1987 edition of Skulptur Projekte. Ten years later, when he was again invited to take part, he created a floor relief sculpture for a large open area of the Schlossplatz that was mainly used as a car park. Deacon was interested in this site because of the contrast between the open, urban location and the rather scruffy, purely functional space.1

After Poussin consisted of a stainless steel beam enclosed by a snaking asphalt track. A characteristic feature of Deacon’s sculptures is that they take their shape from the human body, and this piece was no exception. After Poussin specifically referred to a work by the French Baroque painter Nicolas Poussin, where the central motif – the stiff corpse of a man with a snake wrapped around it – is almost engulfed in the depiction of a panoramic landscape.2 This inspired Deacon to place his asphalt snake with the rigid steel beam in the similarly expansive urban landscape of the Schlossplatz.