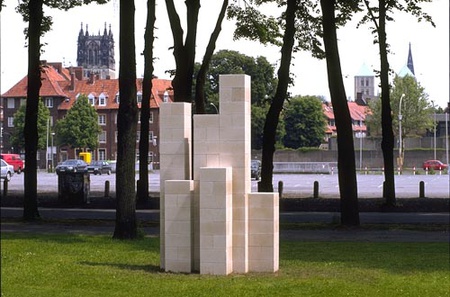 Schlossplatz (until 2012 Hindenburgplatz), lawn south of the southern gatehouse (AStA).

Aerated concrete blocks first began to appear in Sol LeWitt’s work in the mid-1980s. As a material it is cheap and available almost everywhere, as well as being easy to handle, even for unskilled labourers. The material together with LeWitt’s reduced formal vocabulary also allowed complex ideas to be brought about in outdoor contexts. Initially, LeWitt intended his brick-built sculptures to be given a coat of paint, which as with his metal sculptures was supposed to shift attention away from the material onto the form. At the close of the 1990s, however, he created a large series of works which were not painted. In contrast to the more extensive of these Irregular Progressions or Irregular Towers, which resemble the skylines of US American cities, his work for Münster was more subtle in appearance.2 Its location on a non-descript patch of lawn makes the sculpture seem quite desultory – maybe a response to the controversy surrounding Black Form in 1987.