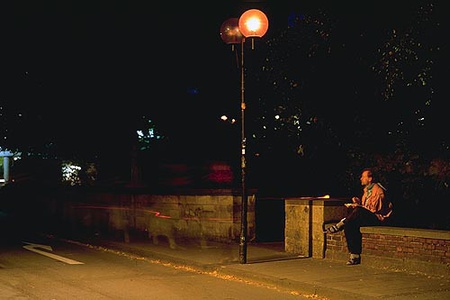 Tony Oursler became known among other things for his video sculptures. These “dummies” made of cushions and articles of clothing with human faces projected onto their heads imitate talking animate bodies.1They reflect the relationship between people and their environment by permanently turning to address their vis-à-vis.

Oursler’s installation for Skulptur. Projekte in Münster 1997 also played with forms of approaching the viewer. His contribution was based on an ordinary street light that lit up and began to speak with a male voice as soon as anyone came near it, as if the urban furniture were drawing attention to itself. Oursler intimately conflated the processes of viewing and experiencing. Likewise, space, the human body, and movement also intertwined and through the anthropomorphisation of the street light conjoined the objective world of the city with the work’s viewers.