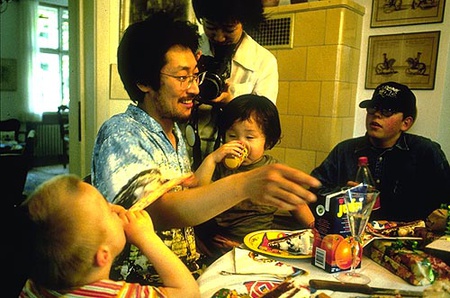 Two video installations with footage of performances staged in various places around Münster, including Domplatz, the Schlossgarten to the rear of the palace, near the Aasee, Ludgeristrasse as well as schools, kindergartens, the museum, the theatre, a cinema and the pedestrian precinct.

Pedestrian underpass in front of the main station, on Berliner Platz (closed since July 1999 since when it has been converted), in the historic section of the Westfälisches Landesmuseum für Kunst und Kulturgeschichte, Münster.

For Skulptur. Projekte in Münster 1997 the Japanese artist Yutaka Sone conceived a video installation showing a number of previously staged performances. One year prior to the exhibition the artist had himself filmed every day celebrating his birthday as a public event in several places around Münster, both in indoor and outdoor locations. People of all ages came to congratulate the artist. They sang songs to him and gave him presents and a birthday cake with candles which he then blew out. He edited the collected footage into a 22-minute video which was then shown during the 1997 exhibition on screens in the pedestrian underpass at the main station and in the historic section of the Westfälisches Landesmuseum für Kunst und Kulturgeschichte.

By screening such a purportedly highly private moment in public spaces in Münster Yutaka Sone was seeking to explore the threshold between the individual and society.1 While in many cultures a birthday is celebrated as a joyful occurrence to commemorate a person’s existence, Sone staged it as a collective experience that had no need of a fixed location or particular individuals.