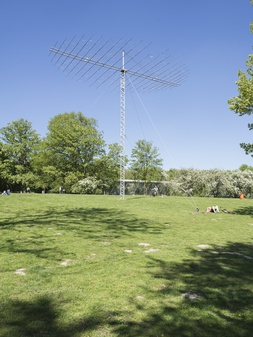 * 1933 in Dnipropetrowsk, Ukraine
lives and works in New York, USA

Ilya Kabakov’s work “Looking up. Reading the words…” on the northern shore of the Aasee alludes to Donald Judd’s 1977 concentric concrete rings, which is located nearby on the same side of the lake. Just like Judd, Kabakov too addresses the relationship between the sky and Earth. The installation rises vertically towards the sky, like a transmitter mast. On closer inspection filigree lettering can be detected in the spaces between the antennae, for a viewer lying on their back the following text can be deciphered with a little effort: “My Dear One! When you are lying in the grass, with your head thrown back, there is no one around you, and only the sound of wind can be heard and you look up into the open sky – there, up above, is the blue sky and the clouds floating by – perhaps this is the very best thing that you have ever done or seen in your life.”1
The spectator is being addressed directly, like instructions the text invites the viewer to contemplate. The phrases are reminiscent of Sehnsuchtslyrik, a German poetry of romantic yearning, the blue of the sky symbolising the topos of infinity. To the eye roaming between near and far, the letters repeatedly dissolve into shimmering wire shapes. This impression of shimmering which is increased in direct sunlight, visualises the process of electronic transmission – in this case information is not being communicated by invisible electronic waves, but materially by wire lettering.
The transmitter mast with antenna acts as a symbol for our technological civilisation. The work refers both to information overload and the opportunities technology provides for communication, “the volume of which increases with each year, and which, as everyone knows, increases the sum of all human potential”2. That the message consists of a simple text that is directly transmitted, is regarded by Kabakov himself as a playfully ironic protest against the gradually increasing economies of information.3