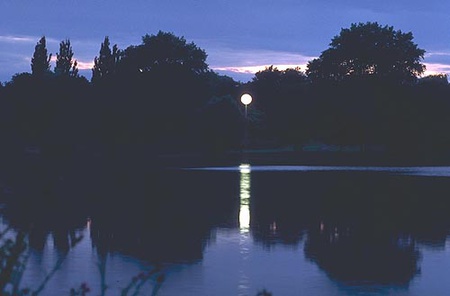 Meadows on the northwestern shore of Aasee lake below Annette-Allee.

Temporary installation in June 1997 during Skulptur. Projekte in Münster 1997

For her project Vollmond Isa Genzken created an object on the shore of Aasee lake consisting of a stainless steel mast topped by a sphere of frosted glass that shone day and night. With no other form of illumination in the vicinity, from close the object resembled a street lamp.1 Of this artificially formed celestial body so frequently cited in myths and poetic accounts Genzken says it “appears as a mediator to the natural moon between earth and the sun. And once a month we have the pleasure of seeing two full moons at the same time.”2