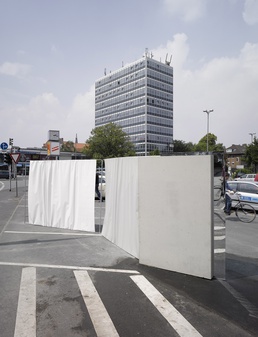 lives and works in Berlin, Deutschland

For skulptur projekte münster 07 Nairy Baghramian erected a sculpture on a car park near the main station, a site surrounded by roads with heavy traffic, commercial buildings and other elements of urban infrastructure. The construction – three white textile surfaces, each one slightly angled to the next, mounted on metal frames – was reminiscent of building site fencing. With its minimal aesthetic the work acted above all as a spatial intervention barring the view. The materials used in the work – metal rods and smooth surfaces – echoed characteristics of the urban setting. At the same time, with its slightly angled form and non-transparent surfaces the object also created new space. With an appearance that at first glance looked improvised, it roused the curiosity of passers-by while at the same time keeping them at a distance. The artist conceived the work Entr’acte as a kind of folding screen to divide the public car park. Visitors were made to wonder what exactly was being separated or screened from what. Not least of all, the work also prompted associations with territorial boundaries and political segregation.

This artist also participated in: 2017