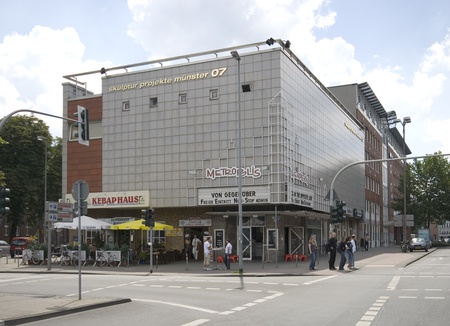 Von Gegenüber [From the Opposite Side]

lives and works in Berlin and Leipzig, Germany

In 2007 Clemens von Wedemeyer used a vacant cinema to screen a film he had shot in the railway station district. In a montage of eight five-minute sequences, the work presented moments from the course of a fictional day in the life of a homeless person.

The dynamic camera work describes a day of aimless roaming seen from a subjective perspective, starting in the morning and ending at night at a park bench. In between, the film takes us through pedestrian tunnels and along platforms, registers peripheral incidents and captures fleeting glances. The soundtrack records words of caution and snippets of conversation that suggest secondary lines of narrative, yet without these being pursued any further. While travellers only briefly skim this everyday place in transit, for the film’s nameless and faceless protagonist the area around the train station represents a terminus – a place of passage as a permanent abode without any prospect of privacy. By being screened in a loop, the film heightened the sense of an unchanging, circular daily routine that is barely shaken even by unexpected incidents. Since the fictional protagonist is never on camera and only reflected in the gazes – or averted gazes – of passers-by, he acts as a kind of surrogate for all those who lead precarious lives, who in the perception of many people are subject to the mechanisms of blanking out unwanted reality. We are held in suspense about which people are simply bystanders and which are actors. As in many of his works, Clemens von Wedemeyer addresses aspects of visibility, presence and absence in this film filled with a sense of threat. In doing so he inextricably interweaves documentary and staged elements.

In 2007, on leaving the cinema, one was invaded by a sense of uncertainty, but also of sharpened awareness. Cineastic and urban spaces were interlaced in an unconventional manner. For his work Wedemeyer found inspiration in Dan Graham’s Cinema (1981), an architectural model which by means of mirrors and windows suspends the distinction between inside and out, real and projected space, in favour of permeability. 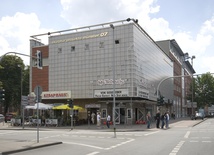 Clemens von Wedemeyer
Von Gegenüber [From the Opposite Side]