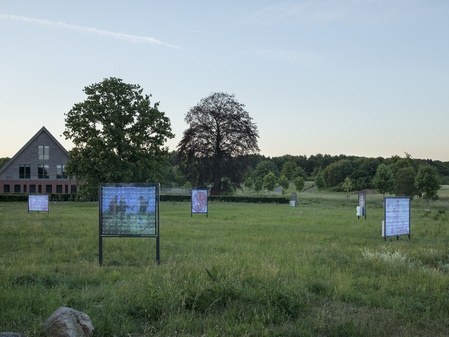 Temporary installation for the duration of the exhibition.

Ei Arakawa’s art is mostly performative and includes everyday objects, works of art, and people as his actors, as it were, with each accorded an equal footing. Music and lyrics play an important role in his installations and performances, as he draws on the artistic strategies of the Gutai group and Fluxus.

For Skulptur Projekte 2017, Arakawa staged a light and sound show on the south-western end of Lake Aa. He grouped seven pixelated LED paintings he assembled himself on the grassy space. Paintings by Gustave Courbet, Nikolas Gambaroff, Jutta Koether, Joan Mitchell, Amy Sillman, Reena Spaulings, and Atsuko Tanaka served as source material for these panels. Situated adjacent to Haus Kump - one of the oldest settlements in Münster and the seat of the Academy of Design and Crafts under the aegis of the Chamber of Crafts and Skilled Trades - these illuminated pictures accompanied by sound were arranged like an audiovisual choir in the landscape.

As is often the case in Arakawa’s work, painting was endowed with a performative potential. Arakawa’s artistic approach mirrors, among other things, his ambivalent relationship to the contemporary reception of painting as an object hung on the wall. In earlier projects, for example, he carried canvases through the museum space to disrupt rigid gallery conditions and enable a mutual activation potential between image and recipient. Standing, walking, singing, or speaking together becomes an act of collective creativity. This frequently engenders an agency in which the idea of the individual is replaced by a communal, participatory energy. That is why the objects he produces are also characterized by a powerful Do-It-Yourself aesthetic: he is not interested in the perfection of a mechanically produced, anonymous result.

The notion of the collective was important for Arakawa’s Münster project in two respects. He combines a group of digital panels that illuminated a landscape and — quite literally — gave them a voice, while granting the digital copy an interpretative authority over itself and the corresponding original. The community of objects generated new forms of itself from an audiovisual interaction that could only be partially controlled. Furthermore, a temporary community of visitors was created at a peaceful and remote location. The walk and the encounter with Arakawa’s LED paintings on the green field was reflected in the choice of Courbet’s The Meeting (1854). The original source of this LED-painting shows the important encounter of the wandering artist with his patron while walking through a flat, green, pastoral landscape. 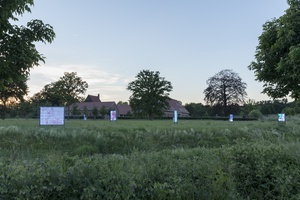 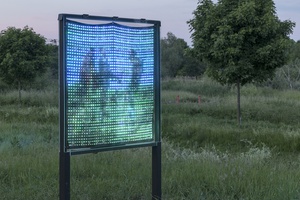 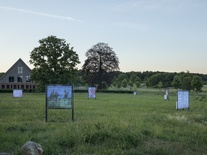