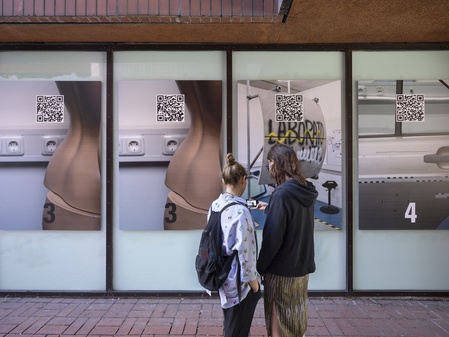 16 mm films transferred to digital Video (colour, sound), between 2 and 3 min., accessed via posters with QR codes, Free Wi-Fi is provided at all locations

Andreas Bunte’s artistic interests focus on the interaction between technology, the human body, and architecture and the question of how this interplay shapes and determines our material and immaterial environment.

His work Laboratory Life, which was created specifically for Münster, is based on the interplay between moving pictures and scientific experimental set-ups. In these films, Bunte removes everyday occurrences — like the rotation of a car-wash brush on a windscreen, a plastic bag flapping in the wind, or someone putting in a contact lens — from their original context and places them in a laboratory-like setting under video surveillance. Bunte’s films enabled viewers to observe isolated processes in a new light, particularly when ‘motion capture’ was used to reduce the performance of an everyday activity to an abstract dance of points and lines in front of a black background or when human limbs are replaced by robot arms. By means of QR codes that have been printed on posters and hung up around Münster, these everyday choreographies could be watched on viewers’ phones. In other words, the films were not screened in interior spaces but could be activated on any standard smartphone by scanning the QR codes. The film posters were pasted straight onto the architectural surface of the city. In this way, the video surveillance under lab conditions unfolded in a direct encounter with actual everyday life in Münster. With the help of our constant companion, the portal we call the phone, Bunte’s Laboratory Life opened a brief cinematic windows for us through which to view an urban environment.

Bunte’s interest in scientific research films and the lab as a production site for films can be traced back to his three-year research project on Göttingen’s IWF (Institute for Scientific Film). This research institute, which was active from 1957 to 2010, sought to disengage time-based phenomena from their original context and conserve them as moving pictures in the neutral environment of a laboratory. In addition to recording these processes, Bunte’s films document the embedding of film production in the reality of a lab and examine the extent to which a lab can ever be a place of neutral observation. He also sees the everyday actions and processes reproduced there as time-based ready-mades, where it remains uncertain who is the actual protagonist of a particular event. Objects often seem strangely animated, whereas human actions are dominated by limited opportunities of interaction. At the same time, questions are raised about the correct way of performing the actions: What options are suggested by a car door or a metal detector, especially when these actions are only performed for the sake of video documentation? 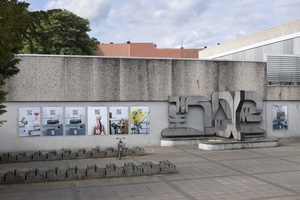 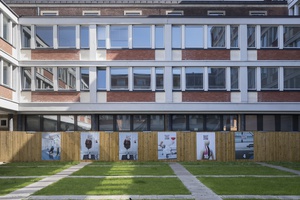 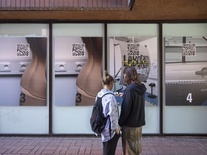