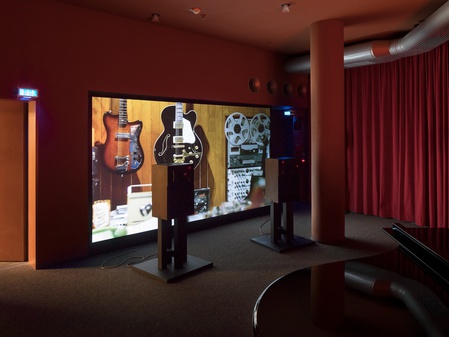 Piano room in the basement of the public library

Gerard Byrne uses his audio and video recordings and his photographs to scrutinize how media are constructed and manipulated, for example, in documentary footage, photographs, interviews, and writings. He examines how historical concepts and myths promote the possibilities of defamation and the rise of fictional facts, and how they dominate an evaluation of cultural production and debates about present and future socio-political events. His films appear in high-end formats, they steal the show with their excellent picture quality, their cinematography and decor, and the acting, speaking performances, and entertaining dialogues they contain. And yet they are fragmentary in nature. Byrne montages sequences from documentary footage and restaged scenes that he interrupts with black screens and spatially dramatic cuts, as well as close-ups of faces or functional objects. The works reveal themselves in installations that seem to be staged according to the particular narrative, the cinematic storytelling, or a visual or musical motif, allowing the audience to interact with the performance. Byrne updates the impulses of Bertolt Brecht’s epic theatre, utilizing both visual alienation effects and disruptions as well as the temporal and spatial opening of the works themselves. This highlights a delayed clarification of perceptive viewing habits and invites the audience to consciously perceive themselves in the process of the artwork as well as in the social, cultural, and ethical processes and thus to become observers and actors.

In Münster, Byrne selected a room adjacent to the gamer room at the municipal library as the site for his project In Our Time. Byrne’s installation at the library presented a large back-projected image of what slowly reveals itself to be the control booth of a radio studio from another era. Byrne’s camera continuously floats through this mise en scène, building up the scene through the detailed, empirical accumulation of an impression of the space, from one micro-impression to the next. Whilst the camera moves within the space, an accompanying soundtrack drifts between popular music, news, weather, and other pre-recorded sound for broadcast, which are interspersed with synchronized sound of the presenter we see, periodically addressing the absent audience via microphone. In and around these fairly archetypal sounds, we see and hear activities of an otherwise hidden space.

Radio shows, like the popular magazines Byrne often referenced in earlier works, are preoccupied with the threat of transience and the desire for currency, the imperative being to be of their time. The radio presenter in In Our Time rather unsurprisingly references the day and time of day routinely, and yet these references in Byrne’s film appear to uncannily synchronize with our own ‘real time’ as viewers. In the hidden room in the basement of the library, In Our Time then contrives a challenging mix, contrasting the performativity of the extroverted broadcast voice with the introverted, jaded physicality of its host body, oblivious as it appears to be of itself as a spectacle for Byrne’s floating camera. Conflations of presence and absence, sculpture and theatre, this time and other times—In Our Time brought these ideas together, and undid them, in the context of Skulptur Projekte. 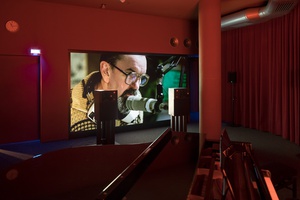 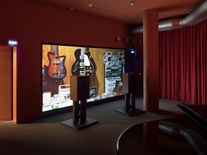 Gerard Byrne
In Our Time