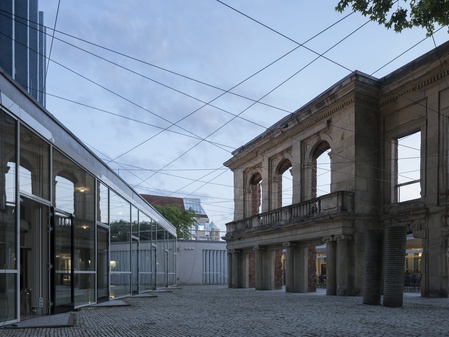 Theater Münster, patio on the first floor, entrance via outside staircase

CAMP is an interdisciplinary studio currently made up of Shaina Anand, Ashok Sukumaran, Zinnia Ambapardiwala, Simpreet Singh, and other actors. It was founded in 2007 and continuously regroups for specific projects. Within the context of long-term projects, the group has developed a range of investigative, cultural initiatives for the twenty-first century. CAMP makes use of various media — CCTV, electricity, archives; many of its projects are characterized by an affinity for technological processes.

Ashok Sukumaran and Shaina Anand created a piece in the Theater Münster as CAMP’s contribution to Skulptur Projekte 2017. The architects of the first new theatre to be built in post-war Germany (Harald Deilmann, Max von Hausen, Ortwin Rave, and Werner Ruhnau) chose a section of the façade of the Romberger Hof, the theatre which was destroyed in World War II, and integrated it into the modern construction. CAMP stretched a system of cables between the ruins and the glass façade from the 1950s. The exhibition site was thus transformed into a fictional extension of the building, which emphasized and connected the existing assemblage of destruction and reconstruction, exterior and interior. The new system of reference expanded on the existing temporal layers, which from today’s perspective are both rooted in the past, to include the question of the relationship between the utopian promises of post-war modernism and the present. CAMP’s system of cables symbolized a global network and the still unfulfilled promise of comprehensive horizontal participation in grassroots democracy. By operating switches hanging from electrical wires, visitors could trigger various environmental changes, thus proposing a ‘vertical’ to impinge on the ‘horizontal’.

CAMP creates a metaphor for systems of participation and support, from the access to electricity—which is now privately owned almost everywhere across the globe — to digital communication and the immanent possibilities of manipulation. At the same time, the black net specifically reminds us of the lighting wires and ropes that are used backstage and hung from the ceiling of a theatre to help create an illusion on stage. CAMP addresses the contingent and constantly changing power structures in today’s societies. Modern architectural elements and the claims they make — for example, that glass façades ensure transparency — are questioned with regard to their actual qualities and other aspects that come to light in everyday usage: historically speaking, who was on which side of the glass, and what is the situation today? Why did the ideals of equality and participation in grassroots, horizontal democracy fizzle out? And, in spite of all this, what pathways and vertical shortcuts or incremental processes can provide systemic access? 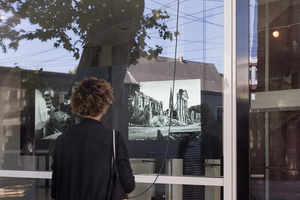 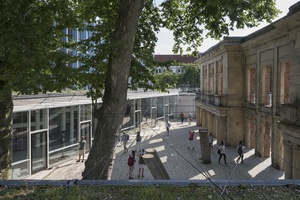 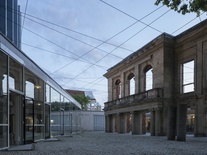