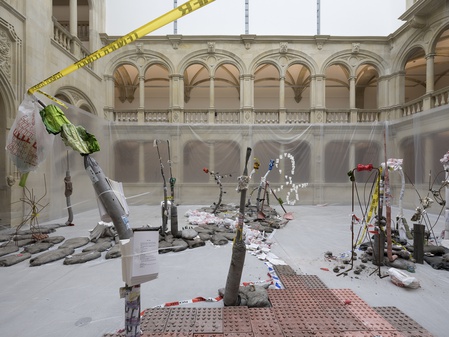 Installation in the atrium covering an area of ca. 215 m²

Sculptures in front of the building of the museum:

Atrium in old building of LWL-Museum für Kunst und Kultur and outdoor area in front of the old building, Domplatz 10

* 1977 in Newcastle upon Tyne, United Kingdom

In many of his works, Michael Dean develops a sculptural script within a space. However, his objects, which are frequently made of materials like cement, sand, and earth, don’t necessarily depict specific letters. Rather, they are to be seen as an abstract semiotic system that generates meaning via a process of interaction — like words in a sentence.

The artist installed a large, transparent plastic sheet inside the atrium of the LWL-Museum für Kunst and Kultur, which was draped from the first-storey banister to the floor, covering it like a canopy and creating a space within a space. Apart from one entrance, which was aligned with what used to be the main entrance to the cathedral square, all the other ways into the atrium were covered with plastic sheeting. In this way, Dean re-established the original direction of movement through the arcade as designated in the historical construction plans of the old museum building. Using peepholes at eye level, visitors could take a look at the sculptures inside the plastic sheeting. The artist’s height as well as that of his wife and children served to determine the height of the peepholes. By peering through the holes, visitors were assigned roles in the performance — both watching and being watched. An essential part of the installation was a walkway in the form of the letter ‘f’ and made of concrete slabs, an element he consistently includes in his work: written in cursive, an ‘f’ is both an identifiable letter as well as a continuous abstract line. The sculptures located within the plastic sheet were reminiscent of urban objects — street lamps, public rubbish bins, refuse. Stickers were affixed to the transparent sheet. In the adjacent external space, Dean fastened objects to the street lamps on the cathedral square, using bicycle locks and padlocks. In so doing, he continued his urban tale in the museum context and, vice versa, returned sculptures to the city environment.

This link-up between the museum space and the urban space also played a role at the Skulptur Projekte 1977: Joseph Beuys had planned to install a wedge of tallow in the urban space as part of his project Unschlitt / Tallow, but the work was relocated inside the atrium. Since then, the conceptual orientation of linking the city’s external space with internal architectural space has often been evident at this location, which itself seems to be an external architectural construction turned outside in. The source of Dean’s sculptural work is his interest in letters, words, and sentences as part of a contingent framework of meaning. With his excessive use of stickers, which he designs based on existing layouts and affixes in various places and on diverse surfaces, Dean cites Street Art techniques that have been increasingly employed in the commercial sector for so-called guerrilla marketing. Dean now returns this procedure to an artistic context. 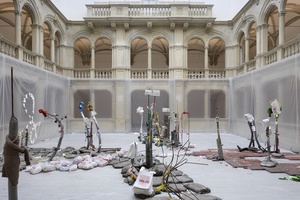 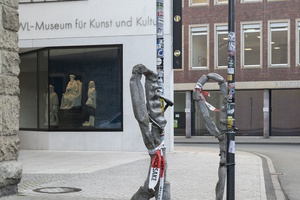 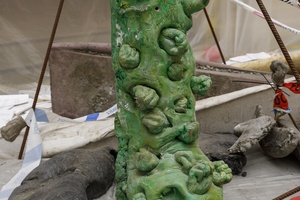 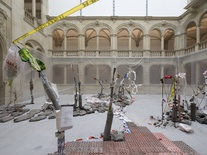