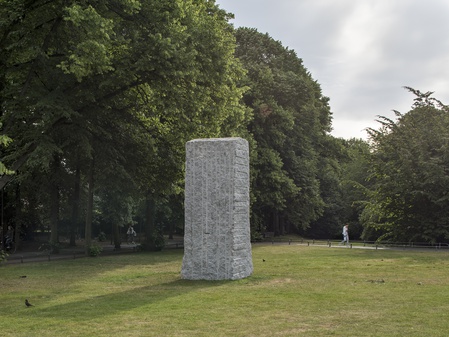 North-eastern meadow between Ludgeriplatz Square and Promenade (behind bus stops)

Part two of the work on the courtyard of the town hall in Marl, Creiler Platz 1

Lara Favaretto’s objects and installations are characterized by a minimalistic style, yet by conscientiously embedding her work in a carefully selected location, she gives it a strong social and political impact. By using materials such as stone or metal, her objects initially convey the sense that they are designed for a much longer space of time. However, Favaretto’s art disappears at the end of an exhibition when it is either dismantled or completely destroyed.

Favaretto’s ongoing series of Momentary Monuments has been executed in various forms since 2009. For Skulptur Projekte 2017, this series has been continued on the Promenade and in the neighbouring town of Marl, in each case with a hollowed-out granite boulder. At first sight, the four-metre-high stone seemed to be an alien object or a glacial erratic. And yet, when circling the boulder, it became evident that it was wrought by hand, which raised questions as to its function. There was a little slot that money can be dropped into. At the end of the exhibition the stone was destroyed, the resulting gravel reused, and the collected money donated to charity. The artist has decided to give the money to the organization Hilfe für Menschen in Abschiebehaft Büren e. V. (offering help to people facing deportation).

Favaretto’s monument was empty at the beginning of the exhibition and meaningless in the best sense of the word. Normally public monuments or memorials refer to a particular event or a historical person to keep their memory alive in current discourse. Donations are usually collected before monuments are erected to pay the commissioned artists. Favaretto, however, changed the normal process and reinterpreted certain functions. In particular, the object’s temporary existence and its destruction, with the debris and remains being put to further use, were diametrically opposed to the concept of institutionalized monument conservation.

Nevertheless, the symbolic meaning of the object wasn’t derived from the form itself but rather emerged as a result of the site-specific interaction: on the Promenade, Favaretto’s stone began a dialogue with the Train Monument from the 1920s and the nearby immigration office. The roundabout in the middle (Ludgeriplatz) topographically connected the two contexts. The Train Monument honours the Train Battalion as well as two high-ranking German officers who died in battle, one in the former colony of German South West Africa and the other in the Boxer Rebellion in China. The donations collected inside the monument were also for a foundation that has been caring for refugees in a ‘shelter for those scheduled for deportation’ since 1996. The facility, located in a rural area near the town of Büren, is responsible for accommodating refugees from all over the state of North Rhine-Westphalia, thus corresponding to the fundraising aim of the Momentary Monument in Marl. The charitable aspect of Favaretto’s work produced a strong sense of contemporary relevance, which, in a broader sense, critically reflected on the relationship between art and politics. 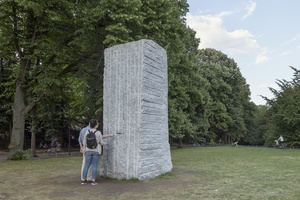 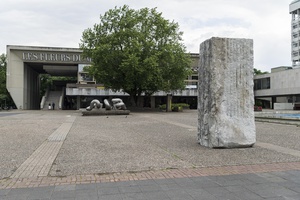 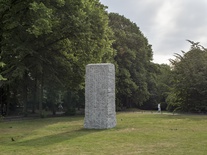