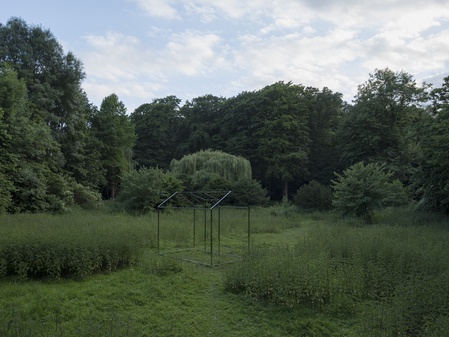 Fourth house of the house project since 1974

The work is now situated on the company premises of Jäckering Mühlen- und Nährmittelwerke GmbH, Hamm.

The work of Hreinn Friðfinnsson often evokes intricate storylines of inspiration, conception, and creation, containing layerings of time and nature, both revealing and concealing the mysteries of the world around us. A work spanning the artist’s career, House Project (1974–), is sustained by its grand narrative. The first iteration of the project was, in fact, a far-flung ephemeral gesture, which would go on to echo in successive forms.

“In the summer of 1974, a small house was built in the same fashion as Sólon Guðmundsson intended to do about half a century ago, that is to say an inside-out house. It was completed on the 21st of July. It is situated in an unpopulated area of Iceland, and in a place from which no other man-made objects can be seen. The existence of this house means that ‘outside’ has shrunk to the size of a closed space formed by the walls and the roof of the house. The rest has become ‘inside’. The house harbours the whole world except itself”.1

With House Project Friðfinnsson turned the tale of an eccentric anomaly into a pointed confrontation with the boundaries of space. The work’s history has unfolded to include the 1974 construction, Second House’s migration from Iceland to its permanent home at Domaine de Kerguéhennec in France in 2007, the homecoming of Third House — constructed in 2011 on the original site of First House in the remote lava landscape outside of Reykjavík — and now Fourth House encountered within Skulptur Projekte Münster.

Every new ‘house’ was physically constructed inside out in turn, with each iteration successively dematerialized through this process of inversion or mirroring. Whereas First House and Second House were created with traditional Icelandic building materials — wooden constructions with metal siding, wallpaper, a door, and windows with curtains — Third House was conceived as a drawing, a simple steel outline of the frame, becoming a kind of echo of First House. Similarly devised in this reduced, yet inverted form, Fourth House culminates the project in a fully mirrored state — a transforming work—interacting with its surroundings.

In light of the fact that every homecoming requires further venturing, the work needed to migrate once more without a permanent home, becoming in a sense forever nomadic, forever in motion. Five kilometres outside the inner city of Münster in Sternbuschpark, Friðfinnsson’s work nearly melts into its surroundings, and yet its reflective quality materializes in relation to each visitor, as the frame of a house surfaces and space is constructed. A reflected reality is mirrored and structured by its own form. 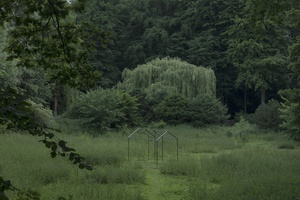 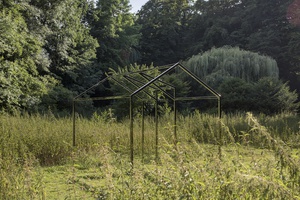 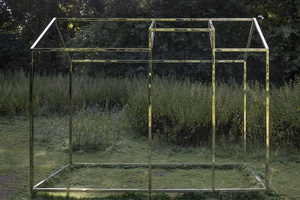 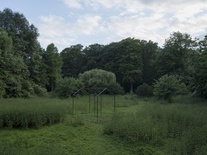 Hreinn Friðfinnsson
Fourth house of the house project since 1974