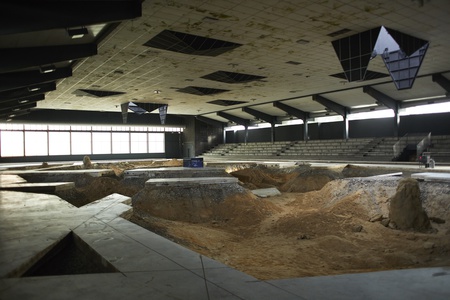 Pierre Huyghe’s works often present themselves as complex systems characterized by a wide range of life forms, inanimate things, and technologies. His arranged organisms combine not only biological, technological, and fictional elements, they also produce an environment for humans, animals, and non-beings to evolve in no matter what, like microscopic unicellular organisms or viruses. Huyghe’s constructed situations are reminiscent of biospheres, where other laws apply than in nature: structural parameters for changes as well as phenomena like swarm behaviour and cluster development are used, but, in the end — as with any other artistic material — these prove to be the final limits of the will to make new possibilities happen.

For Münster’s Skulptur Projekte 2017, Huyghe developed a time-based bio-technical system in a former ice rink that closed in 2016. This involved bio- and media-technological interventions and required extensive architectural de- and reconstruction. All the processes taking place within the very large hall were mutually interdependent: some of them were determined by the HeLa cell line, in a constant process of division in an incubator. Among its various effects, the cells’ growth triggered the emergence of augmented reality shapes. Variations in a Conus textile pattern changed the spatial configuration: for example, the opening and shutting of a pyramid-shaped window in the ceiling of the hall.

By digging into the earth, Huyghe transformed the ground into a low-level hilly landscape. In some spots, concrete and earth, layers of clay, styrofoam, gravel debris, and Ice Age sand were found as far as a few metres underground, interspersed with leftover surfaces. This space was inhabited, for instance, by algae, bacteria, beehives, and chimera peacocks.

Biological life, real and symbolic architecture and landscapes, visible and invisible processes, and static and dynamic states were all fused into a precarious symbiosis.

Pierre Huyghe
After ALife Ahead