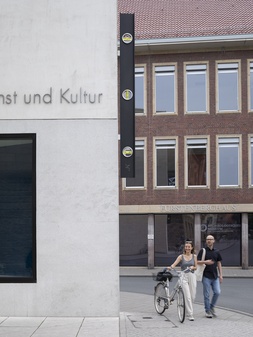 John Knight, A Work in situ

After Skulptur Projekte 2017 the work was purchased for the collection of LWL Museum für Kunst und Kultur, Münster with the financial support of Brillux. It will be shown in temporary exhibitions.

John Knight’s space installations, logos, lettering, and objects are a response to the institutional framework and the commercial interests of museums and galleries. His works visualize the interaction between the specific context of his presentation, the materiality of his artwork, and the viewer’s perception of it: the meaning of any given artwork is created by the interaction of these aspects. Distancing himself from the self-referentiality of Minimal art, Knight has been conceiving projects since the late 1960s that seem to contradict the implicit purposelessness of art. They are instruments of institutional critique, formulated with razor-sharp precision, that map out their own place within the political microcosm of the art world and, at the same time, strive to open it up to sociopolitical reality.

In 1969, Knight’s series of works entitled A Work in situ marked the beginning of a long-term study of the conditions of art perception. For his work Levels, he positioned several spirit levels in an exhibition space, standard industrially manufactured carpenter tools from a building supplies store. In 2017, for Münster’s Skulptur Projekte, Knight had the Level produced by a high-tech manufacturer in California: the black-lacquered object contains three vials, filled with liquid and each containing one air bubble; the level is completely functional. It has been mounted, parallel to the vertical, at a slight distance from the sandstone façade at the pointed front of the new building on the northern side of the LWL-Museum für Kunst und Kultur. The mounted Level showed its own degree of inclination. At the bottom end of the object there was a logo with the initials JK which the artist adds to his works like the branding used in corporate design.

Knight focused on architecture as a conveyor of signals and targets the way art is used to serve the interests of institutional marketing strategies. The spectacular nature of the large display window that frames our view of Heinrich Brabender’s Gothic sculpture group The Entry of Christ into Jerusalem (c.1516) is contrasted with his own almost incidental piece. By pointing out the productivity of a view that is always exploratory—in which a Gothic sculpture need not be any more meaningful than a carpenter’s level—Knight questioned the idea of intrinsic value. His initials JK updated the discussion about how to deal with Otto Piene’s work Silberne Frequenz (1970), which spans two sides of the museum’s façade. When Silberne Frequenz was reinstalled, the LWL logo was placed above the northern entrance right in the middle of Piene’s work. This decision was a manifestation of the fusion of public and private commercial interests that Knight’s work calls attention to.