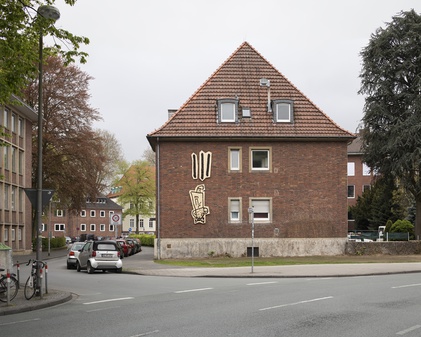 Temporary Installation for the duration of the Exhibition

* 1973 in Lund, Sweden, lives in Stockholm, Sweden and Bremen, Germany

Samuel Nyholm, who publishes his figurative drawings under the acronym Sany, works as a graphic designer and artist. Frequently his sketchy drawings borrow from Danish Pilsner cartoons from the 1960s and 1970s in terms of both their visual language and choice of motif. They vary motivic situations, which are peopled by a handful of fictional characters who keep popping up again and again, as the drawings refer topopular culture’s slapstick genre and play with prejudices and stereotypical simplifications. One particular focus of the cartoons, which sometimes echo the distant style of Saul Steinberg, can be found in the arbitrary character of linguistic and symbolic systems. They often humorously depict scenarios from the world of art, highlighting misunderstandings and misinterpretations and thus pointing to the gap between a symbol and its meaning.

Sany’s work Marginal Frieze for the Skulptur Projekte linked two different areas. On the one hand, a multi-part mural was exhibited in the urban space, while, on the other, his cartoons were part of the exhibition’s accompanying advertising campaign: his work circulated as film trailers, on banners, bags, flyers, and stickers — as a patchwork of subliminal media fragments with a wide range of influence in the public space. For his Fallande ting Sany installed large-sized pyrographies on the walls of several buildings in Münster and Marl, showing individual falling figures. For this project he turned to familiar characters from his cosmos of images: with Estrid, the Valkyrie, and Yggdrasil, the World Tree, he re-interpreted two figures from Nordic mythology, who were joined by the monkey Apis and the Greek artist Stavros.

Sany’s contribution alluded in many respects to the marginal, the fringe. And that applied specifically to the location of his pyrographies, which were reminiscent of the large billboards and murals that covered the fireproof walls of vacant urban spaces during the post-war years. In his use of folk-art pyrography, he drew on an old technique associated with basement hobby rooms and stuffy bourgeois values that has been refused admission to the canon of accepted artistic media. By blowing the figures up to a large-scale format, he referred to the disparities in value ascription within the art system, which are based not only on conventions but also on the relationship between the signified and the signifier. Having slipped from their mythological, human, and cultural-historical context, Sany’s figures fell from the sky. The drawings introduced a dynamic, snapshot-like element to an urban space that is otherwise dominated by advertising, thus promoting the interplay between the pictorial surface and its surroundings, similar to viewing a sculpture. In this way, Sany’s figures seemed like they are just about to hit the kerb — and look just as endangered as the passers-by who unknowingly crossed the street beneath them. 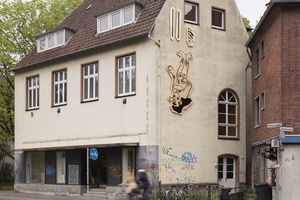 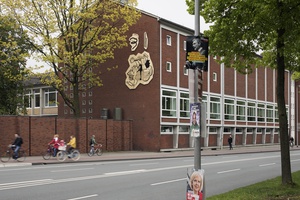 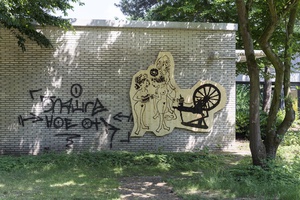 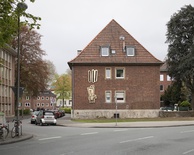