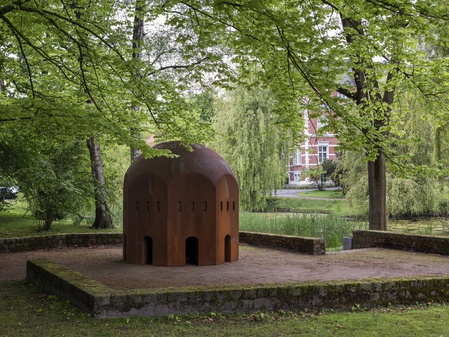 * 1954 in Oldenburg, Germany, lives and works in Düsseldorf, Germany

Thomas Schütte’s placement of his figural and architectural sculptures spotlights inconspicuous places or sites that have been forgotten. The development of his works is also influenced by references to architecture, history, and stories. At the same time, the references have a disturbing effect: they are strangely reinterpreted or interrupted by the surprising and thought-provoking motifs. In this way, the viewers’ awareness of urban space and the diversity of public life is sensitized. Urbanity is a key theme in Schütte’s artwork—he has been contributing to the discussion of art in public spaces since the 1980s. Yet he prefers to keep his distance to conceptual matters. In fact, his works are accessible to viewers even without contextual knowledge.

Schütte placed the artistically oxidized, 3-metre-high, 2.5-ton steel sculpture in the grounds of the Alter Zoo, the old zoo: on sandy ground in the middle of a clearly defined area partly surrounded by low stone walls. Each of the architectural structure’s eight sides has an open archway, above which—in the upper third of the surface—there are three window recesses that are closed at the back. The scale of the doors and recesses points to the model-like quality of the work, which could be the prototype for a domed octagonal building. Situated between the eight archways, sixteen steel walls partition the interior and are aligned towards the centre of the essentially circular base. In each case two walls quickly come together at a 45-degree angle to form a chamber. Between the chambers there are eight corridors leading to the heart of the structure, creating a shared empty space at the centre that is lit by an oculus or eye in the dome.

There are also two other related round structures on the grounds located along a visual axis with the Nuclear Temple: the fortified ruins of the Owl Tower (Eulenturm), a relic of the former zoo, and the batardeau, constituted by the walls of a weir. This constellation updates our view of urban history (which always has its technological and militaristic side too), colonial history (which, for example, was present in Münster in the ‘Völkerschauen’, the ethnological displays at the Alter Zoologischer Garten), and cultural history, derived from the historic architectural remains, which have a dynamic relationship with the Nuclear Temple. The work gave rise to speculations about an understanding of history that makes use of closed units of time and space. The Nuclear Temple alluded to the vanishing lines of civilization and its periods of destruction, to the course of the civilizing process and its effect on the constitution of the community and of the subject. 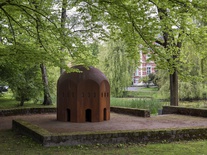