North side of St. Petri church, beside the so-called Jesuitengang footpath, temporary installation from 1977–1981, permanent installation since 1987

* 1938 in Düsseldorf, Germany
lives and works in Cologne, Germany

Since the end of the 1960s Ulrich Rückriem has been developing works of art from a variety of natural stone, which the artist selects on site in quarries and subsequently works using two techniques: splitting and cutting. Dissected into individual segments, the monoliths are thereafter reassembled in their original form. Cut Dolomite likewise bears clearly recognisable traces of fracturing and joining; it consists of nine unworked wedge-shaped stones, tapering upwards. “My modelling of the material determines the object itself and is relation to the new location”,1 is how Rückriem describes his working method. The title references, as is generally the case for his works, the material and technique employed.
The sculpture, located on the north side of St. Petri church, formerly a Jesuit church, beside the so-called Jesuitengang, was positioned in such a manner as to create a passage, an almost square space between the Gothic church and the sculpture. This area is defined towards the church along the length of the work, the reverse side of the unworked, dramatically tapering stones forming a wall. However, Cut Dolomite is not only conceivable as being derived from the proportions of the church’s architecture. The forms, expanding downwards to their bases on a small lawn, also constitute a kind of counterpart to the buttresses, their solid mass entering into an on-going dialogue, not only with the church wall but also the surroundings.
Initially the sculpture was a temporary installation until 1981, stirring heated discussions amongst the local population about modern sculpture within urban public spaces. In 1987 the work was re-installed in its original location at St. Petri church, intermittently being part of the Grässlin collection in St. Georgen. Cut Dolomite is now owned by the City of Münster. 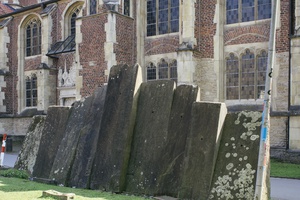