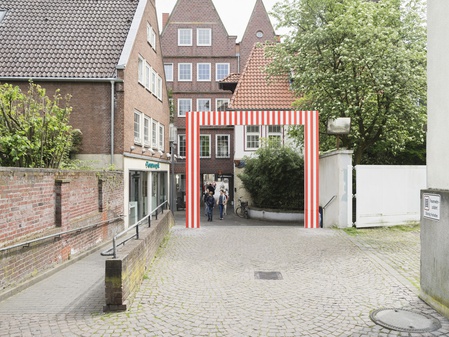 In 1987 four gateways were installed in each of the following alleyways between Paulusdom [St. Paul’s Cathedral] and the city centre for the duration of the exhibition: Geisbergweg/

Domgasse/Spiegelturm/Jesuitengang; one door has been permanently installed in Domgasse since mid-2016

* 1938 in Boulogne-Billancourt, France
lives and works in Paris, France

For Skulptur Projekte in Münster 1987 Daniel Buren erected striped objects at four points of access to Domplatz [the Cathedral Square], referencing in an abstract manner the form of a gateway. Due to their size and positioning they hindered the entering and leaving of the square. As in many of his installations, Buren here too decided on vertical stripes exactly 8.7 cm wide, which have long served him as the basic structuring component of his work. Even though the stripe pattern is reproducible and is in itself neutral as well as universal, Buren’s work is nevertheless always an immediate reaction to a particular spatial situation, not only interacting with existing places but also creating new ones.

In pursuit of this idea, the installation related to the separating of the church and the wider community, which until the 19th was made material by a wall on this spot. Today’s Domplatz was formerly surrounded by a border dividing the city into the realms of the divine and worldly. Even if this strict interpretation of the cathedral’s immunity is no longer applicable in any practical manner, it is still reflected today in the layout of the city centre. A fragment of the original wall at the entrance to Domgasse remains visible as does the rounded corner of the immunity wall that shaped the arrangement of the merchants’ houses located at Prinzipalmarkt.

Buren’s work refers to this historic structure, which remains an architectural presence in the city today, even if his gateways never adopted the function of “border security”. Originally installed as a temporary intervention in the summer of 1987, the gateways were tolerated for the duration of the exhibition despite making access more difficult. Following the end of the 1987 Skulptur Projekte, the gateway located at Domgasse alone remained, providing an example of art being able to “get down from its pedestal and rise to street level”1. In 2015 Buren made a gift of the gateway to the city of Münster and since May 2016 it has been permanently installed. 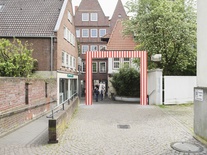