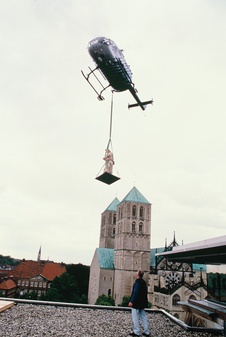 Various ecclesiastical sculptures from the 15th–17th centuries from the holdings of the Westfälisches Landesmuseum für Kunst und Kulturgeschichte, Münster

Airspace above the centre of Münster, roof of the historic section of the Westfälisches Landesmuseum für Kunst und Kulturgeschichte, Münster, and the museum depot in Drensteinfurt

lives and works in Berlin, Germany, and Istanbul, Turkey

Having seen three proposals for projects intended for the western façade of St. Paulus Cathedral turned down, Ayşe Erkmen circumvented the need for permission from the cathedral chapter with Sculptures on Air, which used the airspace over the city as its sphere of action. This still allowed her to make explicit reference to the cathedral and the surrounding urban space.

To perform the action a helicopter flew tours above the cathedral with ecclesiastical sculptures from the museum collection suspended on ropes. Subsequently the sculptures were lowered onto the roof of the historic section of the museum opposite. As Ayşe Erkmen wrote in her project description, “The sculpture will stand there overlooking Domplatz, until the next sculpture arrives to take its place.”1 The action also served as a commentary on the foregoing dialogue between the church and the museum.

On 22 June 1997 the helicopter flew as planned above the cathedral carrying the sculptures and once again incurred the displeasure of the cathedral chapter. The reason was a Holy Mass that overran its schedule, hence the helicopter’s overflight at the same time was felt to be a great disturbance. This prompted a legal dispute between the cathedral chapter and the museum, reflecting the debate about public and ecclesiastical space and questions of territorial hierarchy.

This artist also participated in: 2017