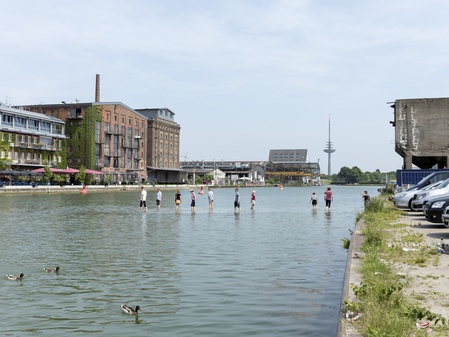 Ayse Erkmen’s site-specific interventions call our attention to things that are overlooked, presenting what would otherwise remain hidden. She interferes with pre-existing structures and alters their functions or operational processes, revealing, at the very least, an unusual if not completely new view of something familiar.

For Skulptur Projekte 2017, Erkmen selected Münster’s inland harbour as her location. Just below the surface of the water between the bustling Nordkai (northern pier) and the industrialized Südkai (southern pier) she installed a jetty that links the two riverbanks. It created the impression that visitors are walking on water. In that sense, they became visible actors on Erkmen’s stage. In addition, the artist pointed out problems of a sociological and city-planning nature: How are borders drawn on maps, and how is sociocultural access achieved on the drawing board? How can existing hurdles be overcome, both physically and metaphorically?

Within Erkmen’s oeuvre, the concepts of transportation, relocation, and displacement keep manifesting themselves anew. For example, during Skulptur Projekte 1997 she set objects from the collection at the Landesmuseum in motion in a very unusual manner when she had them circle above the city with a helicopter. Her plans for an intervention at St Paul’s Cathedral had been rejected, so Erkmen made use of the airspace above it, which she was permitted to use. For her contribution this year she creates a pathway which wasn’t intended as part of Münster’s urban structure and deals once again with water, an element that frequently appears in her work. At the 54th Venice Biennale in 2011, she had a water treatment facility installed in the city, entitled Plan B. Her piece Shipped Ships was also specifically related to waterways: in 2001 she arranged for passenger ferries rented from Japan, Italy, and Turkey to carry local residents, turning the river Main in Frankfurt into a possible means of getting about in the city.

The courses of rivers have often been used on political maps as a possible place to draw borders, while waterways and man-made canals served as starting points and catalysts for urban development. Accordingly, waterways have had an ambiguous place in the processes of civilization, representing either possibility or restriction. Erkem not only mirrored this divide in her piece for Skulptur Projekte 2017, she literally bridged it. In addition to that, her jetty consisted of sunken containers which are normally used to transport goods on ships on the surface of the water. The municipal harbour of the Dortmund-Ems Canal, which is rarely used by ships became accessible on foot to Münster’s residents and visitors, thus linking two separate urban spaces that were previously separated by the harbour basin—using a water bridge rather than a land bridge. 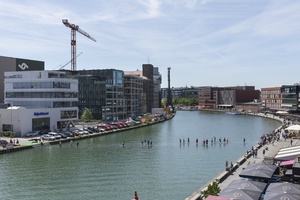 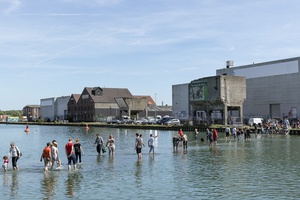 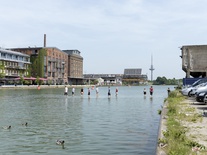