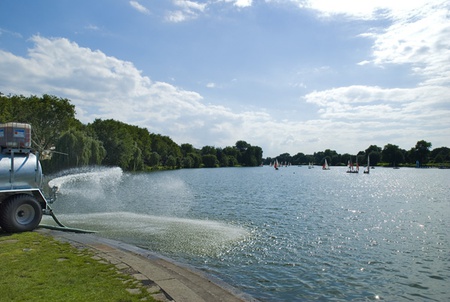 Frame and tank both zinc-coated

The semi-circular platform on the eastern shore of the Aasee, between Adenauerallee and Bismarckallee. Temporary installation for the duration of the exhibition skulptur projekte münster 07

During skulptur projekte münster 07 a fountain spurted uninterruptedly and at high pressure from a liquid manure spreader into the Aasee. However, it was not liquid manure the Danish artist Tue Greenfort was spraying into the lake – as the silver vehicle might lead one to think – but water pumped up from the lake, enriched with added Iron (III)-Chloride.

The artificial Aasee was initiated in the late 19th century as a reservoir to the southwest of the centre of Münster and completed in 1934. It is the largest recreational area within the city and is fed by the river Aa, which flows through the intensively farmed Münsterland region. Water from the fields is drained into the river, flushing large quantities of phosphates into the lake. This process of eutrophication stimulates the growth, amongst others, of blue-green algae in the lake. Thus human contact with water is still considered a health hazard.

Scientific reports say “diffuse entries” are responsible for the lake’s pollution, brought on by the meat industry in the region.1 In Münster, so as to protect the meat industry and its major EU subsidies, attempts have been made to reduce the level of phosphates in the lake and stop algae growth by adding Iron (III)-Chloride. Instead of tackling the cause of the problem and imposing regulations on industrialised farming and meat production, this solution is purely cosmetic. Tue Greenfort’s work commented on the attempt to lower the level of phosphates in the lake by adding chemicals. With the manure spreader he was also casting an ironic light on this method for maintaining the seemingly natural idyll. 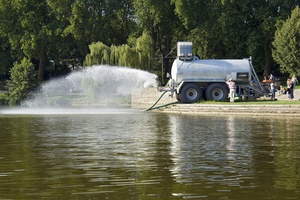