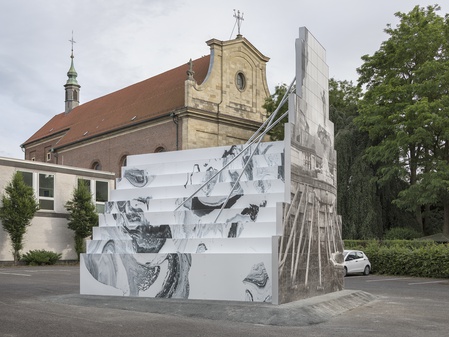 The artist duo Peles Empire, consisting of Barbara Wolff and Katharina Stöver, takes its material and name from the Romanian royal castle of Peleş, built in 1883. The interior is dominated by a chaotic hodgepodge of replica furniture and décors from various stylistic periods. The two artists pick up on the historical dimension of the furnishings and adopt a postmodern process of reproduction, sampling, and quotation as the basis for their artistic practice.

For Skulptur Projekte, Peles Empire erected a gable, nearly eight metres high, in the immediate vicinity of the city’s historic centre. The gable’s tiled façade showed an image of the castle’s crumbling terrace as well as the supports that keep it from collapsing. The façade was braced by poles and propped against a stepped volume, whose surface was covered with black-and-white streaks, mimicking a stone surface. This surface visually anticipated the Jesmonite bar inside. Both are black and white and thus created the effect of a photocopy. The object, which is located in a carpark, is not just for viewing from the outside — it can also be entered. The first impression suggested some intrinsic value, but this was misleading: what looked magnificent and solid from the outside turned out to be a print pasted on a sheet of thin aluminium-based material. The size of the tiles and the stepped element behind the façade were based on the size of standard A3 paper. This and the black-and-white imagery were a clear reference to the technology of photocopying where every copy increasingly becomes an abstraction of the original.

Peles Empire used its piece Sculpture to allude to the historicized architecture of Münster’s Prinzipalmarkt, which was rebuilt after being destroyed in World War II — not as an exact reconstruction but according to the historical example of the 1950s. Based on the original façade, the plans for the new façade, and what was actually built, the duo developed a kind of ‘standard’ gable from all three elements to define the front of the sculpture. Akin to black-and-white image interference, the object commented on the picturesque charm and homogenized narrative of the apparently medieval town centre. Peles Empire’s work also included a social dimension: at the beginning of their collaboration, the two artists used their flat in Frankfurt am Main as a kind of salon — after moving to London, it later became an exhibition space. Photo wallpaper served as the décor for their weekly gatherings in their own living room with depictions of the rooms in Peleş Castle. At that time they had already begun utilizing photocopies, photographs, and collages to transpose the three-dimensional interior of the castle into two dimensions — before finally returning it to a three-dimensional space by using the images as wallpaper. In Münster, Peles Empire once again took on the role of host: the artists organized discussions with other artists in the bar. 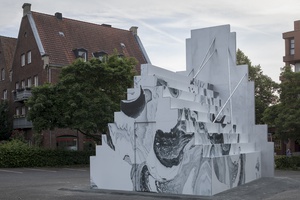 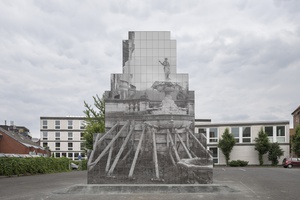 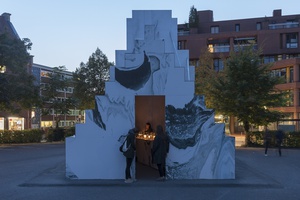 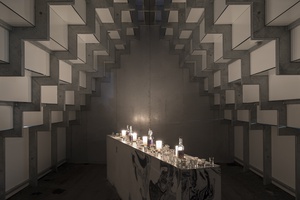 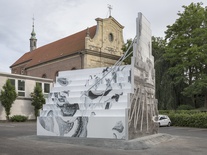